Link to your Sourcebans record​

(If relevant) Who gave you permission to apply?​

- An admin by the name of Racer​

Primary servers + servers you could confidently join in case of a report.​

-Most from afternoons (4-5pm) or occasionally noon (1pm)​

Do you have a working microphone?:​

Yeah, but i don't play jailbreak.​

Previous experience as Admin or Moderator​

-Well discord moderation is a thing i supposed, now i know i might fall into the stereotype of a discord mod, but i'm a pretty laid back one, although i rarely sees people on the servers that i moderate does anything wrong, if they ACTUALLY or purposely does something wrong just to get a laugh out of it... well, you know the rules and so do i.​

What would you say makes you a suitable candidate?:​

- Honestly it's a long story, i've been playing on the server for a pretty long time, after all the mic spammers and script kiddies who joined the game over and over and over again without any regular staff being able to help the people in there, i said to myself "hey why not apply for a staff position in the SG 2fort server", but honestly i'm surprised the server haven't had any dedicated staff yet, the only one i see are staff from other region like EU or US, so honestly it would be a pleasure to be dealing with the problems that the server i have always played on have to deal with and about the punishment and how i would deal with them, like i said i'm pretty laid back but if theres a scripter in the server i would yeetus deletus them out of the server in an instant but for mic spammers, i would give them 2 warnings before muting them or gag depends on where they are spamming.​

(Finally, please briefly explain how you would do your job, e.g. a general overview of your policies and punishments.)​

Last edited by a moderator: Apr 28, 2021
Reactions: Nowtoad, Plastoaide, vinny and 2 others

I had to edit this down as the endless scrolling was giving me whip lash. I've only removed empty space and changed the font size. Nothing was removed content wise.

@Racer911-1 did not give you permission but you don't need permission since you meet requirements. According to racer, you asked him about applying and he told you you had a recent punishment. You waited then applied. Racer wasn't giving you permission.

Application doesn't seem to be taken seriously...'yeetus deletues them out' . Also your chatlog has insults in it. Didn't go to far in it to see if it's bad but I'm giving the benefit of the doubt that this is just playful banter. Would of also been nice to see two examples of stacking in punishments.
Also you've not really made reports and aren't known around here. If you're here just to apply for admin to get powers and leave it won't go down well when it comes to a decision.

But we now do have a dedicated staff to SG2Fort now

So Madact already warned you of having insults on your chatlog, of which you sent a month ago before you took a short hiatus from the game. I recently played with you on SG 2fort and nothing has changed since then. More on that later after I address the application itself.

Reading the application thoroughly it's obvious that you didn't even try or honestly really cared about it; it's very rushed, honestly looks terrible and quite a lot of things you wrote are just bad, and I'll explain why so you know what's wrong in the application in case this gets declined and you want to apply again in the future.

First off, like Madact has said, you referred to Racer911 who allowed you to apply even though you didn't need him to, you clearly didn't even read the application template for applying as admin thoroughly, which already gives off the impression that you're a little incompetent. Though it isn't that big of a deal compared to the rest.

In the 'previous experience as admin' part, you described as being a Discord moderator, but then writes a rant instead to elaborate on it and explaining nothing at all. I think that bit in the end was very very funni though so it made up for it honestly.

You also explained what makes you a suitable candidate for an admin of the server, by kind of just.. activating sherlock mode? While it's true there wasn't a 'regular' staff for SG 2fort at the time of writing, what you wrote other than that is implying that you're an active player (which is good!), but also that you would ban cheaters instantly, alongside a very simple overview of your policies regarding micspammers. Which means that, you haven't actually told why you're suitable to be part of the admin team besides telling us that you're "laid back" for the second time, but also somehow misinterpreting the whole section.

And it seems like you didn't care enough to write anything for the last section of the application? Or did you format it in a way I don't understand? I don't know, but considering everything so far, I doubt it's the latter.

Now for the chatlog problem I mentioned. I'm honestly glad I didn't give my feedback for this any earlier, because I happened to finally be playing in SG 2fort with you earlier today!
So, I remembered having to ban a player for continuing to spam offensive remarks regarding sensitive topics, and you were there actually playing in the server while it was unfolding.

Rulebreaker's chatlog at the time: 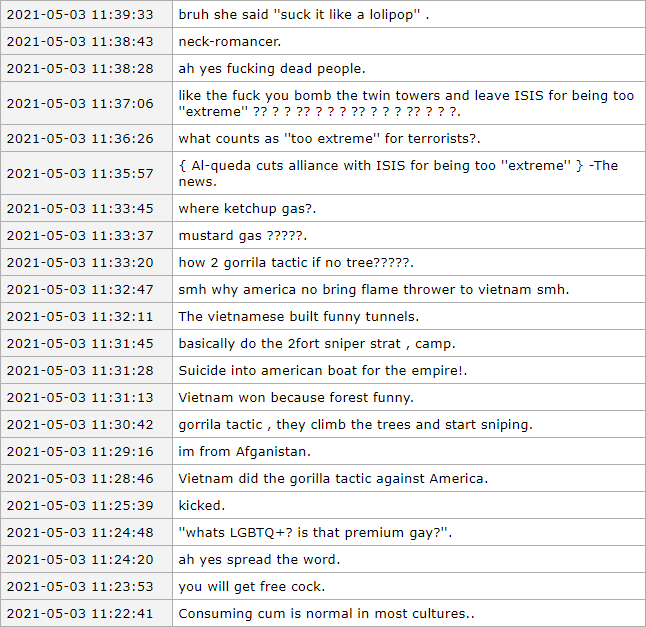 Your chatlog at the time: 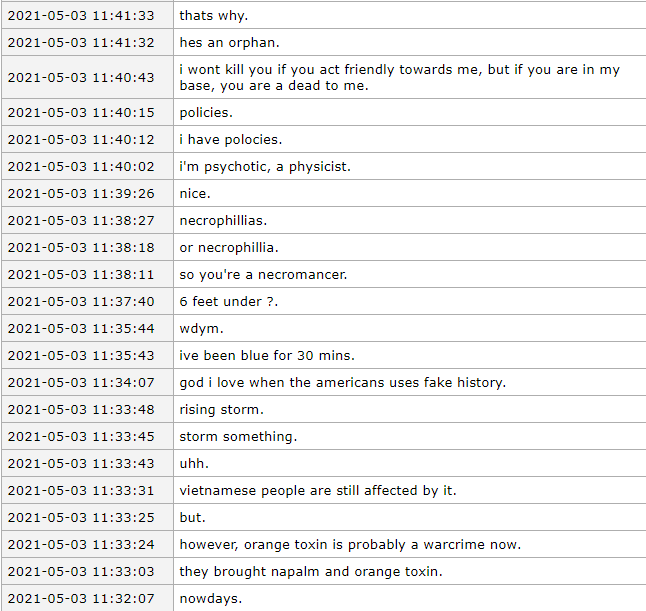 I wasn't there for the first ~5 minutes of it when it happened, but of course instead of telling the rulebreaker to stop and calling another admin like a good candidate, you did absolutely nothing about it even though you actually acknowledged what the other player was saying.

How you were completely unhinged of the whole situation and didn't even do anything, especially as an admin applicant, is entirely beyond me. And that is utterly contrary to what we encourage in this community.

With the only SG2FORT admin giving you a -1, you've only posted an application on the forums since you joined and now you're inactive I'll be declining this application. Please take what Plastoaide said as constructive criticism and you may reapply in one month; 10/06/2021