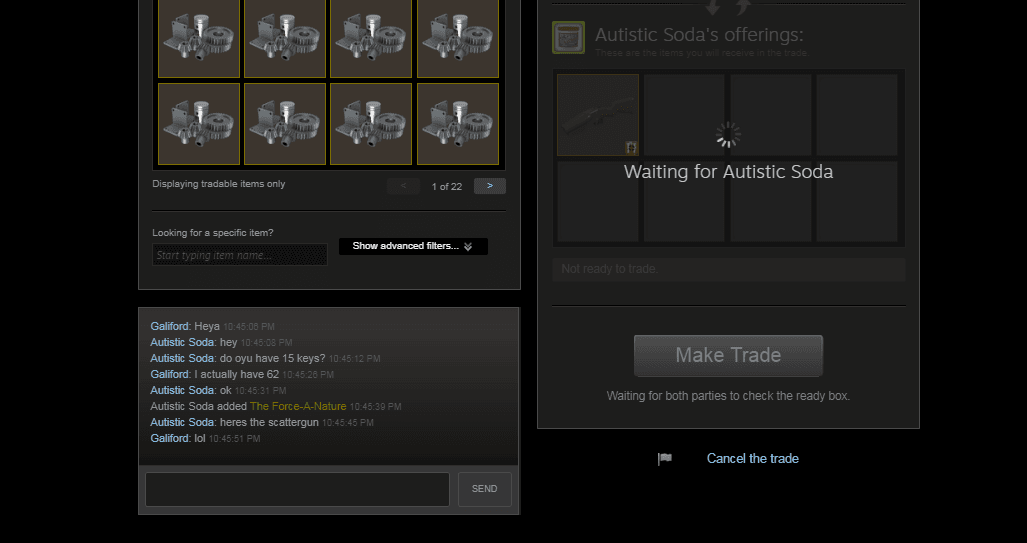 I only managed to nab one screenshot before trade got cancelled

I guess the autistic part wasn't just for show

Hello Galiford.
Firstly, sorry if we admins waited 4 weeks to handle your report. Special thanks to @Roar who warned admins in shoutbox.

The following are Autistic Soda's chatlogs on the exact day and time you started trading with him, according to your screenshot. (Note: There's a different timezone of 6 hours in the Philippines, where you come from).


According to these chats, and thanks to your clear screenshot, it's totally obvious he wanted to scam you.


Also, some minutes before, I suppose he was doing the same with another user, called Diabetes.


In addition, I did read chatlogs from 9th to 11th June: he tries to "trade" the scattergun, other users call him scammer and he even says "if you get scammed, its your own fucking fault not checking". Also he insults a player who doesn't want to write +rep on his profile. Who knows why..

All this material is enough for me to ban the user for attempted scam.

Thanks for your report.
Expand signature