I admit that my previous thread could have been more objective and detailed, so now, I will focus on jb_bunker_b3's issues in their entirety.

1. Layout. - Bunker's layout is the major contributing factor for its removal. The layout boils down to being 1 long corridor that takes a turn on its ends. As a blue, it is difficult to navigate the map properly without being rushed or cornered by reds. To add to this, as you move down the corridor, the hallways get smaller, and the minigames get grouped up too close to each other. Also, some minigame blue sides use teleports, which can be easily camped by reds and causes round delay. Additionally, the layout is also an issue for rebelling reds since the map offers few, if any, alternative routes to run through, and consequently, a rebel red is highly likely to encounter a blue regardless of what they do. The ammo secrets are few in numbers, and some take a lengthy amount of time to complete and/or require access inside a minigame, which makes it difficult to acquire ammo outside of armoury.

2. Visuals - In terms of appearance, it is not the best. Various textures are used that do not contrast or blend well together. There are multiple instances of Z-fighting being visible on the map. The pictures on the walls are all different colours and look out of place with the wall texture. The map also has a consistency issue with its theme since there are random Minecraft textures in Deathrun. Overall, the map still needs multiple visual improvements since the textures that are currently used do not quite make it feel like a "bunker." Also as of recent, jb_bunker_b3 still has lighting issues in certain parts of the map especially in vents where it becomes extremely bright and difficult to see.

3. Minigames - These are mainly gameplay issues or oversights:
1. Class crush: There is no sound indicator for when the weapon appears. Then when it does appear, the display weapon is too small for players to see.
2. Minefield: It is too short, and a couple of heavies could tank all the mines and the rest of the team would be able to run through. Additionally, a boston basher scout can cheat the whole course.
3. True Or false: Only 1 red needs to walk through and die for everyone else to take the correct door, which is a very slow way to reduce reds compared to a regular true or false. This game is also very prone to button griefing.
4. Bumble beam: The first platform is large enough that no one dies from it, so it just ends up wasting time. Otherwise, it is fine.
5. Theatre: The insta-kill is a terrible idea since there are no barriers to stop players on the sides from walking on there. I have seen this get to mass freekill several times.
6. Deathrun: The traps are not separated far enough, and a boston basher scout+medic combo is able to cheat it very quickly.
7. Slide: This game only lasts 2 seconds. The effort it takes to bring every red into there is not worth it for how long it lasts. Also reusing the starting area as the finishing area makes it prone to button griefing as one blue can keep restarting the minigame forever.
8. Jump Rope: The jumprope room is too small to have hard mode on with multiple reds since it becomes difficult to see where the rope is exactly.

Overall, jb_bunker_b3 still contains various major issues. I hope I explained more clearly on why the map should be removed from rotation until it receives drastic changes.
Reactions: Madact and hehe troll

1. You forgot to add a poll.
2. I personally am kind of indifferent towards this map, maybe because I haven't played on it a whole lot compared to other maps. The only real issue I remember having, which got remedied in this new version, is the underground secret area accessed via one of the bottom cells being extremely easily campable by REDs. Otherwise, this map screams "meh" to me. I'd still take it over other maps we've had in the past, such as Aquarium or Soviet.
Toggle signature
This signature must be the work of...

With bunker now received it's update and enough time for folks to process it this removal suggestion now makes sense.

If the map creator makes update changes within this week, would be good with both 2 and 3 where all address within the update. If more time is needed, default to the above statement.
Toggle signature
http://steamcommunity.com/id/madact/
Madact#1369

Despite the fact that I'm very "meh" towards this map I don't think we should jump to removing this map quite yet. It has a b3 (the "b" stands for beta) in the map file name for a reason. Obviously it's still being worked on. We've had plenty of maps still in their beta stage before. Like, this map is FAR from the worst Jailbreak map.
Toggle signature
This signature must be the work of...

Hi, creator here.
I have read your feedback and I totally agree with it's flaws. It is my first map after all.
I very much appreciate the people of the Panda Community play(test)ing it, and giving feedback on what could be better.
I will do my best to improve it every time I make a new version. I am absolutely sure that eventually it'll reach a state where it's actually sort of good.

So the next update will sort of focus on layout and more routes from one end of the map to another. I understand that there are too many minigames in a too small space, and that the overall map needs to expand.
I have played my map on BLU and RED team and I understand your issues with the map.
I will do my best to fix most of the problems Bunker faces right now.

Thank you anyway for giving feedback in the first place, as I said earlier, I really appreciate it.
Toggle signature
Creator of jb_bunker, music producer, sniper main.

(Picture is Fishska's work, not mine; created with SFM)
Reactions: Madact and Denzel Crocker

i personally find the CURRENT stage of the map to be borderline unplayable at some points because blues are like very inactive sometimes and but i feel as if with some touchups maybe a more spacious feel it could be remedied as for what it means in the map pool personally i could do without it for now until revisions are added it just feels very undone which yes it is. but you should make a thread that aims for bug fixes revisions and whatnot ok im done coal out (sorry i just hate when people vote for maps like OOOO NEW MAP regardless of its quality there are so many maps in the pool and 5 are played on repeat 2 of which including bunker arent even done)
Toggle signature 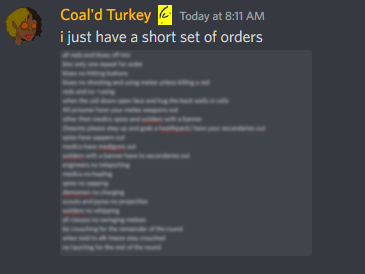 Coal said:
i personally find the CURRENT stage of the map to be borderline unplayable at some points because blues are like very inactive sometimes and but i feel as if with some touchups maybe a more spacious feel it could be remedied as for what it means in the map pool personally i could do without it for now until revisions are added it just feels very undone which yes it is. but you should make a thread that aims for bug fixes revisions and whatnot ok im done coal out (sorry i just hate when people vote for maps like OOOO NEW MAP regardless of its quality there are so many maps in the pool and 5 are played on repeat 2 of which including bunker arent even done)
Click to expand...

How do I make a separate thread on the forums for that?
Toggle signature
Creator of jb_bunker, music producer, sniper main.

(Picture is Fishska's work, not mine; created with SFM)

Alot of feedback has already been implemented into B4, it will be coming very soon.
Stay tuned!
Toggle signature
Creator of jb_bunker, music producer, sniper main.

(Picture is Fishska's work, not mine; created with SFM)

hehe troll said:
How do I make a separate thread on the forums for that?
Click to expand...

off topic or suggestions i would say
Toggle signature

mfw the only good minigame was the one I made

I know @hehe troll is working on another update which will add a few new areas including a cafeteria (diner) and some kind of train which will link both ends of the map to form a circle because at the moment it is simply two dead ends. Disco should be re-opening in the next version too. The map is certainly below average if I'm being nice but it's definitely not the worst. You are right that better textures could have been used as it doesn't really feel like a bunker but it needs more than a simple texture change to make it look like a bunker honestly it would need to be remade from scratch with a better design. I think the overall lighting is a lot better than it was but the vents could do with being made less bright. I do agree with everything you've said about the minigames. Class crush definitely needs some improving to make it easier to see the weapon being shown and an audible indicator would help. The instant kill button on theatre makes it way too easy to freekill as it won't show who has done it in the killfeed.

tl;dr Bunker was released way too early but it's fixable and there are far worse maps on the rotation.
Reactions: ItsNotCalassic and hehe troll
S